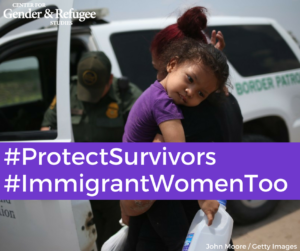 On June 11, 2018, Attorney General Jeff Sessions issued a devastating decision in an attempt to reverse decades of progress in protections for domestic and sexual violence survivors and others who look to the United States for refuge. Invoking a rarely utilized power to certify the case to himself, Sessions reversed the immigration judge’s grant of asylum to a Salvadoran domestic violence survivor in a case known as Matter of A-B-. Ms. A.B. fled to the United States after suffering 15 years of brutal violence at the hands of her ex-husband. Sessions held that violence by non-government actors such as a spouse or gang members would generally not qualify a person for protection, despite the fact that their government was ineffective at protecting them.

This decision, paired with the recent increase in prosecutions of asylum-seekers and the separation of children from their parents, send the chilling message that the Executive branch will stop at nothing to deport anyone without pre-approved legal status, as swiftly and inhumanely as possible to deter future migration.

The effects of these policies are also reaching Washington State: Over 200 parents who have been separated from their children after crossing the southern border are now being held at the Federal Detention Center in SeaTac, awaiting “credible fear” interviews. The Northwest Immigrant Rights Project reports, based on dozens of screenings that they have conducted so far, that a large number of these individuals could be negatively impacted by the Matter of A.B decision, as they are fleeing domestic abuse and gang violence.

Immigration advocates are working to challenge Sessions’ decision in Matter of A.B., and this case does not mean the end of asylum for all domestic violence survivors or victims of private actors because the Attorney General’s decision will be subject to review in the Circuit Court of Appeals. However, this case will create an additional barrier to what was already an uphill battle for many (especially the 86% of detained immigrants in removal proceedings who do not have a lawyer), and appeals can take years. In the meantime, it is likely that many asylum-seekers will feel the pressure to give up and return to face dangers in their home countries rather than face indefinite detention and separation from their children.

Use your voice to stand up for immigrants seeking protection from violence. Look below for suggestions, from Northwest Immigrant Rights Project and Center for Gender and Refugee Studies, on how to do so.

HOW CAN I TAKE ACTION?

Pre-decision:
Her Husband Beat Her and Raped Her. Jeff Sessions Might Deport Her (NYT)
This Salvadoran Woman Is At The Center Of The Attorney General’s Asylum Crackdown (NPR)
Jeff Sessions Wants to Shut the Doors on Survivors of Domestic Violence (MADRE)